The 2014 General Election generated India’s highest ever voter turnout rate, at 66%, a sharp increase from the 58% turnout in 2009. However, many questions remain about the precise relationship between turnout and the outcome of the election.

In these elections, the BJP won 282 out of 543 contestable seats on just 31% of the vote share. In my last piece, I showed how this outcome was a function of BJP’s strike rate in head-to-head contests against Congress (and against embattled regional parties in two states, Bihar and UP), which demonstrated BJP’s ability to project a convincing national vision (unlike Congress). At the same time, there was extreme regional polarization in BJP’s support, which pointed to the limits of BJP’s message in states with strong regional parties and identities.

A deeper analysis of the voter turnout in these elections provides more evidence for these arguments, while clarifying the relationship between voter turnout and BJP support and shedding light on BJP’s prospects for holding on to power in the future.

Changes in Turnout and Partisan Support

The dominant narrative in this election was that of a “Modi Wave,” which referred to then prime ministerial candidate Narendra Modi’s ability to bring new (or passive) voters to the polls and create a swell of support for the BJP.

In order to test this narrative, I have analyzed the change in the voter turnout rate between 2009 and 2014 across parliamentary constituencies and the likelihood of BJP winning in a constituency in which it was contesting the election. The data provides strong evidence for the Modi Wave narrative, showing a clear relationship between an increase in voter turnout and support for the BJP.

In the 116 constituencies in which the BJP contested the election where the increase in the turnout rate was less than 5 percent (to include constituencies where turnout stagnated or declined since 2009), it won only 24 percent of the time. By contrast, in the 312 constituencies in which the BJP contested and the turnout increase was more than 5 percent, the BJP won 81 percent of the time.  For the more statistically inclined, figure 1(b) displays a flexible empirical model demonstrating the relationship between differences in turnout and the likelihood of  BJP victory. According to the model, the BJP crosses the threshold of an even chance of the winning the constituency at approximately a 5.3 percent increase in voter turnout. As the increase in turnout moves towards 20 to 25 percent, a BJP win becomes almost a certainty. 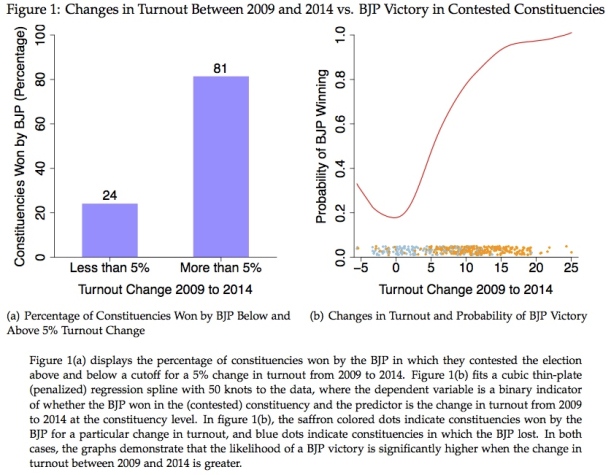 The relationship between increasing turnout and BJP support does not necessarily imply that new voters supported the BJP more than existing voters, but it seems likely that new voters were disproportionately supporters of the BJP. The post-poll survey conducted by Lokniti/CSDS provides some suggestive evidence on this front. Newly enfranchised young voters, aged 18 to 22, supported the BJP over Congress 39 percent to 19 percent. By contrast, those over the age of 56, more likely to be seasoned voters, supported the BJP over Congress 31 percent to 23 percent. In fact, it may very well have been the energy generated in mobilizing new BJP supporters that engendered large shifts in the existing electorate.

While this analysis tells us that when new voters were mobilized the BJP tended to win, it does not tell us the extent to which voters explicitly showed up for the BJP. In other words, did voters specifically show up for the BJP, and, if so, when?

The data show that voters were not particularly mobilized when the BJP was not contesting or, indeed, competitive. In the 115 constituencies in which BJP did not contest election, the average increase in voter turnout was 4.3 percent, and in the 92 constituencies in which the BJP was not competitive, the average increase in vote turnout was just 2.1 percent. 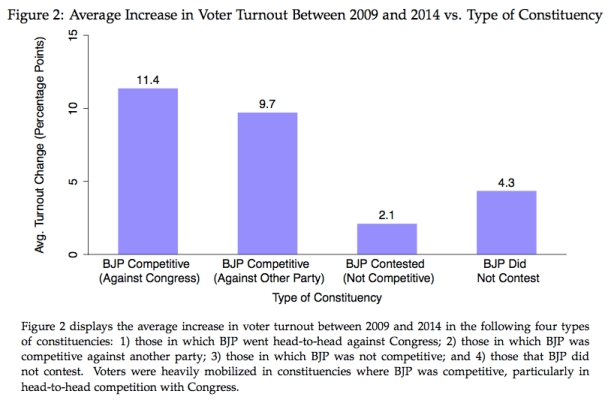 Regional Variation in Changes in Turnout

Much like the vote share for the BJP, the change in voter turnout displays significant regional variation at the constituency level. As the analysis above suggests, changes in turnout closely track constituencies in which the BJP won. Figure 3 displays, side-by-side, a heat map of increases in voter turnout and a map of where the BJP won.

Historically, the variation in voter turnout in Indian general elections has been driven by differences at the state level. One of the major stories of this election is the narrowing of differences in turnout between “high” and “low” turnout states. Of the 15 most populous states in India, 4 states had a turnout rate less than 50 percent in 2009, with Bihar the lowest at only 44 percent. In 2014, turnout rates of the low turnout states increased significantly; the lowest turnout rate of these 15 states was 56 percent (Bihar again). At the same time, most of the high turnout states did not register significantly greater turnout rates in 2014, suggesting little room for additional mobilization in these states. 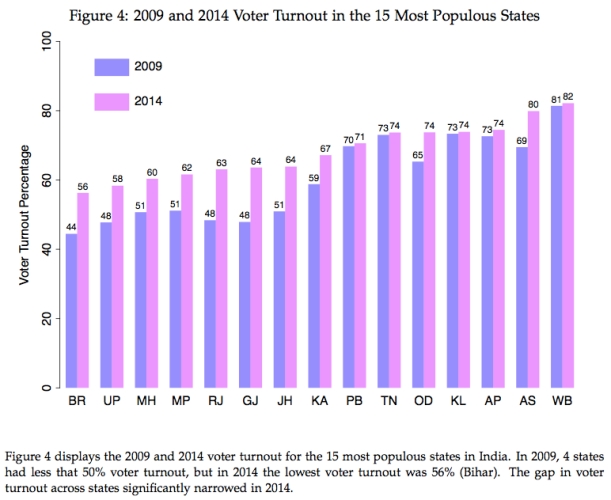 In the previous piece, I identified six states in which the BJP did particularly well, Bihar, Gujarat, Madhya Pradesh, Maharashtra, Rajasthan, and Uttar Pradesh. In these states, the BJP had a strike rate of 91 percent and won 69 percent of their total seats. Figure 4 demonstrates that these six states are among the lowest turnout states, in both 2009 and 2014, out of the 15 most populous states in India. Starting from a low base, these states provided a natural reservoir for the BJP to bring in new voters.

I also demonstrated that the BJP did particularly poorly in five states, Andhra Pradesh, Kerala, Odisha, Tamil Nadu, and West Bengal, with a strike rate of just 7 percent. These 5 states are among the 6 highest turnout states in figure 4. With the exception of Odisha, they also display small changes in voter turnout. With populations already mobilized through strong regional parties, and little existing electoral base, the BJP had little scope to mobilize a large share of new voters in these states.

The data also show that the states in which the BJP has performed poorly are precisely the states with very high turnout. This means that if the BJP is to consolidate power in these states, it will have to do so without mobilizing new voters but converting existing ones. In other words, in addition to dealing with a weak electoral base, the BJP will have to change the minds of voters who may already be mobilized through strong regional parties.

In this election, the BJP projected a national vision of restoring economic growth and macroeconomic stability to India. The scale of voter mobilization suggests that the BJP was offering a national vision that especially appealed to previously apathetic voters. Voter apathy results from believing that all of the existing choices offer little scope for political or economic change.

The BJP presented a different option, but if it wants to consolidate power it will have to deliver on its mandate. The BJP’s particular ability to mobilize voters against Congress only underscores the popular frustration with Congress’ handling of the economy.

Modi will have to disregard the many countervailing pressures being placed on him and act decisively on his “economy-first” mandate. Previously apathetic voters are more likely to become apathetic again, and the BJP is unlikely to extend its base too much regionally. If Modi wants to hold on to the voters he mobilized, he will have to demonstrate that he can stay away from political appeasement and focus on righting the economy.  The upcoming budget is his first test.

Neelanjan Sircar is a Visiting Dissertation Research Fellow at CASI

Dr. E. Sridharan, the Academic Director of CASI’s New Delhi branch, the University of Pennsylvania Institute for the Advanced Study of India (UPIASI), has written a post on pre-electoral coalitions for the University of Nottingham’s School of Politics and International Relation’s blog Ballots and Bullets. Read his insightful analysis of the politics of coalition formation before the election.

India has had seven consecutive elections (1989 to 2009) in which no single party won a majority of seats in the Lok Sabha, resulting in hung parliaments. In 1991, the Congress formed a single-party minority government (which achieved a majority half-way through its term) but in all other cases minority coalitions dependent on outside support were formed, these being large, multi-party coalitions with participation of several regional parties since 1996. In the run-up to such situations, one of the keys to victory for both the leading national parties, the Congress and the BJP, is the number of state-level pre-electoral coalitions formed, for pooling votes based on seat-sharing agreements. Why pre-electoral coalitions? What are the incentives for national parties to form such coalitions, and under what circumstances? Continue reading…

Read the newest installment of our four-part series on the Lok Survey results, “Growth is No. 1 poll issue for voters, survey shows” written by Devesh Kapur, Milan Vaishnav, and Neelanjan Sircar. The survey results showed that overall economic growth was the primary election issue with personal pocketbook concerns like access to government benefits and changes in personal family income falling behind the macroeconomic picture for most Indians. Corruption came in second overall but was the primary election issue in several states including Uttar Pradesh and Bihar. Read about the survey methodology here.

For a peek at analysis to come in future installments of the Times of India Series, check out this recent article in The Hindu about the Lok Survey, “The continuing grip of caste.” Also, stay tuned to this blog more more in-depth analysis.

The Lok 2014 Pre-election Survey was in Livemint on Wednesday. Read the article, “NDA to topple UPA in Lok Sabha Elections predicts another survey” for more coverage of the survey project.

The Lok 2014 Pre-election Survey is a panel survey run by the Center for the Advanced Study of India with funding from the Lok Foundation which reached over 65,000 households across India.  This reflects the largest household sampling of any pre-election opinion poll ever done in India. Read more in our summary report or methodology note.

The Lok 2014 Pre-election Survey results were highlighted in a recent article in The Hindu, ‘2009 vote shares may be reversed in 2014’. Check out the article and continue following this blog for more updates about the Indian voting behavior research project.

The Lok 2014 Pre-election Survey is a panel survey run by the Center for the Advanced Study of India with funding from the Lok Foundation which reached over 65,000 households across India.  This reflects the largest household sampling of any pre-election opinion poll ever done in India. Read more in our summary report or methodology note.

Check out this chart detailing projected vote shares for the upcoming Lok Sabha election from our Lok 2014 Pre-election Survey. BJP is forecasted to gain over half of the vote shares in four large states- Rajasthan, Punjab (with SAD coalition partner), Chhattisgarh, and Gujarat!

These results are based on a survey conducted between October and December of 2013. Read more about the survey project.

What do you think about the predictions?